Food For Thought How to Satisfy a Picky Eater

How to Satisfy a Picky Eater 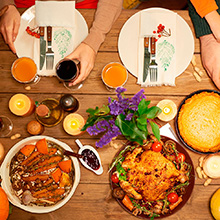 Children who are picky eaters are an annoyance to their parents at best and a major cause for concern at worst. However, it’s a good idea for Mom or Dad to bear in mind that saying no and refusing to eat certain foods is actually a natural and even healthy part of many kids’ development. Picky eating usually shows up around the age of two or three when children begin to assert their independence and realize they have the ability to control their surroundings. An unwillingness to try new foods is part of this control.

Most children eventually grow out of their picky eating habits, but in the meantime parents can feel stressed and worried that their kids are not getting the nutrition they need to grow up healthy and strong. While trying to force kids to eat foods they are set against is often a losing battle, there are a number of techniques you can try to persuade picky eaters to sample something new and expand their palette.

Make It Fun: Cut food into fun shapes using cookie cutters, add food coloring to make fun colors, or put pieces on a stick to eat like a kebob. Try anything else you can think of to make foods more eye-catching and exciting to eat.

Have Kids Contribute: Picky eating is primarily about control, so let your children have the power in other areas. Tell them they are allowed to set the menu for the household once a week, take them shopping so they can help you pick out foods, involve them in your gardening, or let them do some of the measuring and pouring when you cook.

Choose Healthy Options: Make the best of a bad situation by choosing healthy alternatives to common recipes for picky eaters. For example, if your child will only eat cereal for breakfast, make sure you give them a brand without too much added sugar.

Allow for Customization: Make mini pizzas or set up a taco bar and offer several options for toppings or fillings. This is another way to give control of the meal back to the kids.

No Snacking Before Meals: Hunger can be a great motivator. Make sure your family is actually hungry when they sit down to eat. Avoid sodas, milk and any food for at least two or three hours before dinner.

Minimize Distractions: Turn off the television and leave the phones in the other room. During dinner, ask that your children be focused on their food. With less to pull them away, they may be more willing to eat what’s put in front of them.

Set a Good Example: Don’t let yourself fall into the habit of always eating the same things just because your kids do. Talk about different foods you want to try, and casually mention while your children are around that you’re trying something new. If they seem receptive, describe a bit of the taste to them. They may become curious enough that they ask to try it themselves.

A Three-Bite Rule: Bargaining with kids doesn’t always work out exactly as parents would hope, but you can still attempt to set ground rules regarding new foods. Tell them that they must eat at least three bites of something before they decide they don’t like it and gently remind them of their promise every time they try to reject something outright.

Variations on a Theme: It’s not uncommon for kids to reject all foods that look similar, such as all green vegetables. Don’t let them bully you out of taking veggies off the menu entirely, though. Try orange or yellow vegetables instead and see if your child is more willing to eat them.

Try and Try Again: Young children with developing taste buds may need to eat the same food up to 15 times before they are fully able to determine whether they like it. Don’t be afraid to reintroduce old foods that your child has rejected in the past.

Teaching kids to enjoy new food can be a challenging process, but many children do eventually grow out of their picky habits. Just keep a positive attitude and keep trying new meals for picky eaters, and eventually your kids should develop a more reasonable set of likes and dislikes.