Food For Thought Learn Your Deli Meats! A Brief History of Black Forest Ham and Other Favorites

Learn Your Deli Meats! A Brief History of Black Forest Ham and Other Favorites 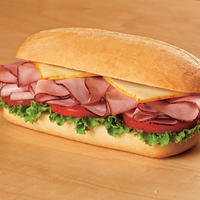 If you're like most people, you enjoy eating food, but when it comes to learning about how it's made or where it comes from, you don't mind being left in the dark. While there is nothing wrong about not wanting to know where your food comes from, you may be depriving yourself of a complete food experience by remaining uninformed. Some foods are as rich in history as they are in flavor, and you may discover that the more you know about your eats, the more you enjoy them.

Black Forest ham is one of the most popular deli meats sold in the U.S. today, and it can be used in sandwiches, wraps, salads and more. However, though many Americans appreciate the flavor of the meat, not many appreciate its rich history.

What is Black Forest Ham

The original Black Forest ham is a variety of dry-cured smoked ham. It typically takes up to three months to produce from start to finish. The first step in producing this deli favorite is to salt and season the raw ham with pepper, garlic, juniper berries, coriander and other spices. The meat is given two weeks to cure, after which the salt is removed. Once the salt is taken out, the meat is given an additional two weeks to age.

After that four-week stretch of curing, the meat is cold-smoked using juniper brush or sawdust and fir. The temperature of the container holding the ham must not reach more than 77 degrees Fahrenheit for several weeks. It is during this period which the ham develops its trademark black skin. Though the ham may look bad, the black skin is actually what gives it its distinctive flavor. Once removed from cold storage, the ham is air-cured for an additional two weeks before going on the market.

When it comes to meat flavorings, there are several, including maple, hickory-smoked and hardwood-smoked. One flavor favorite is applewood-smoked.

Once a meat is cured, it is either sold as-is, as Black Forest ham is, or it is smoked first. Smoking serves to add more flavor to meats that do not accrue a lot of flavor during the curing process. It also makes the meat easier to slice. Manufacturers smoke ham by heating it to about 130 degrees in a smoker. The flavor of the meat comes from the type of wood that the manufacturer uses to generate the smoke.

Traditionally, various hardwoods, such as hickory, are burned to produce the smoke. In the case of applewood-smoked turkey and ham, the type of wood used is from apple trees. This can impart the meat with a slightly sweeter and richer flavor than smoke from other varieties of wood. If you want to enjoy such quality foods at affordable prices, look for applewood meats with the Bar-S Foods label on them.

Bologna gets a bad rap and is often referred to as a "kid's lunch meat." People who believe that bologna is just for children have obviously never had Signature Smokehouse Bologna from Bar-S.

Signature Smokehouse Bologna is smoked to flavor perfection. Once it comes out of the smoker, it has the rich, smoky flavor of a fine ham or turkey breast. Enjoy it sandwich style or, if you just want a light snack, serve it up with cheese and crackers. The flavor is so rich that you don't need all the trappings of sub to appreciate it.

The production of deli meats is often underappreciated, which is a shame, because those who do take the time to learn a bit about these foods and how they're made have a whole new respect and appreciation for their flavors and makers. If you're ready to enjoy your lunch meats in a whole new way, brush up on your history and get to know a bit more about the meats you eat.