Food For Thought The Origin of the Corn dog

The Origin of the Corn dog 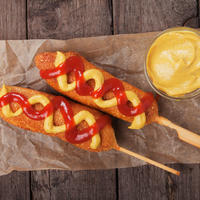 If you’ve ever been to a carnival, boardwalk or amusement park, you’ve probably enjoyed a corn dog. To make one, you start with a plump, juicy hot dog on a stick, then dip it in cornmeal batter and deep-fry it. Savory, sweet and undeniably greasy, the corn dog is American innovation at its best. But who invented the corn dog? It turns out corn dog history is full of colorful characters, but no definite answers.

Corn dogs have been around for less than 100 years, so you would think it would be easy to pin down their creator. Unfortunately for history, corn dogs are so good, everyone wants to take credit for them. More than one American eatery claims to be the original “home” of the corn dog. Are any of them right?

Neil and Carl Fletcher were Vaudeville performers when they decided to start selling ‘corny dogs’ at the Texas State Fair in 1942. Skip Fletcher, son of Neil, remembers taste-testing corny dogs for months while they were being perfected, so they can definitely lay claim to the recipe for their corny dogs. Fletcher’s corny dogs are still a huge hit at the Texas State Fair, but did Neil and Carl come up with the idea of a cornmeal battered hot dog on a stick, or just make a great version of an idea that was already around?

Meanwhile, a year earlier in 1941, a small fountain shop in Portland, Oregon, called Pronto Pup was selling its cornmeal battered and deep-fried hot dog on a stick. George and Vera Boyington, the original owners of the first Pronto Pup, were apparently thrilled when their creation took off and became an American craze. The Pronto Pup website claims ‘corn dogs’ are just off-brand pronto pups, but were George and Vera really the first? Corn dog history stretches even further back in time, so it seems unlikely.

There’s a place in Springfield, Illinois, called Cozy Dog Drive-In, that claims they came up with the modern corndog. As Ed Waldmire, one of the founders of Cozy Dog Drive-In, tells it, he was in Muskogee, Oklahoma, sometime before 1941 when he had the most delicious sandwich at a roadside diner. It was a hot dog baked inside cornbread. The problem, as he saw it, was that it took too long to prepare.

He told his friend Don Strand about it, and Don, whose dad was in the bakery business, got to work coming up with a recipe that would become the modern battered and deep-fried corn dog. After years of perfecting their recipe, they launched cozy dogs in 1946. Would you say they really invented the corn dog, though, or just perfected it?

While corn dogs really exploded in popularity during the 1940s, when they became a staple at state fairs and carnivals, their true origins may lie even earlier in American history. Those cornbread baked hot dog sandwiches Ed Waldmire encountered in Muskogee were probably common across the South and Midwest, where cornbread was a staple. Even the stick and deep-frying probably weren’t new.

In 1927, Stanley Jenkins from Buffalo, New York, filed a patent for an apparatus to prepare what can only be described as a corn dog. In his application, he describes how his apparatus can be used for preparing all kinds of food impaled on a stick, coated in batter and deep-fried, including franks. Clearly, Stanley Jenkins was a genius, though he may not have been much of a business man. Even though he made corn dogs, he never thought to sell them.

So, Who Invented the Corn Dog?

The true origins of the very first corn dog may always be shrouded in mystery, but corn dog history seems to indicate that corn dogs are such a great idea, more than one person thought of it. Deep frying was invented by ancient Egyptians over 7,000 years ago, and battered, deep fried food has been around just as long. Once hotdogs baked in cornbread started showing up in diners, it wouldn’t be a big leap to think about putting one in a deep fryer. If you’ve ever known anyone with a deep fryer, you know the temptation to throw just about everything in there to see what happens.

So, the next time you’re at the county fair, enjoy a corn dog. This is a treat so tasty that people all over the country came up with the idea!