Food For Thought The History of the Grill and Barbecuing

The History of the Grill and Barbecuing 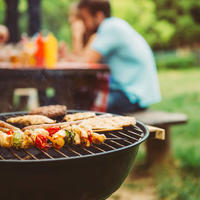 Since the time that the concept of cooking food was created, there have been many different ways to prepare and cook food. All of these different methods can create different tasting experiences, making for more diverse additions to dinnertime. One common way of cooking is using a grill, more specifically for barbecue. Here is how this style of cooking became popular.

The beginning of grilling can be traced back to the 17th century when you look at the Arawak tribe of the Caribbean and South America. These people used sticks to create a flame over a fire and place the meat on it. They called this method of cooking Barbacoa. This idea was adopted by conquerors from Spain, who evolved it until the 18th century when people in southeastern America took up the idea. Pigs spent hours roasting over a fire, and various sauces and different types of wood were used to give different flavors to the meat.

In 1897, Ellsworth B. A. Zwoyer was the first to patent a design for charcoal briquettes, although his thunder was somewhat stolen by the Kingsford company, who many associate with grilling. This company was created by Henry Ford, and he used wood scraps and sawdust that he got from the assembly lines of his cars to create the charcoal.

There isn’t much about the barbecue grill until the late 1940s, when more people were choosing to live in the suburbs after the war. During this time, many backyards became filled with grills. However, these mass-produced appliances were commonly known for burning the meat and creating a large amount of ash. The concept was refined in 1952 by a welder named George Stephen. He cut metal to make dome-shaped grills, using the top half as a lid to seal in the flavor and help distribute heat more evenly. He then added vents so that the fire wouldn’t smother. This design is what many people think of when they think about barbecue grills today, as many modern models are based on this model.

The next evolution in the basic grill came in the 1960s when there was a push to get people to buy more natural gas. Melton Lancaster and William G. Wepfer, from the Arkansas Louisiana Gas Company, created a new type of grill that ran on propane. This increased the price of grilling; however, these appliances were often easier to use and thus they boomed in popularity, replacing some of the older models.

The next change didn’t come until the 1980s, when a man by the name of Bill Best added ceramic burners to barbecues. The idea was that the tile was heated by the propane, creating infrared radiation to cook the food directly. This is the design commonly used in restaurants for its ability to more evenly cook food while also locking in the juices, keeping the meat tender and flavorful.

By the 1990s, people were becoming more health-conscious and began to view excess body fat negatively. Then came the invention of the George Foreman grill, known for reducing fat. The design grilled from both the top and bottom while allowing the fat to drain off. Sales were in the hundreds of millions, and the name is still well-known today.

The 2000s saw more advancements in grilling. Infrared grills became cheaper as the patent on them expired; however, they still cost enough that they are not available to everyone. In 2004, the world’s largest grill was created on Big, a show featured on the Discovery Channel. At over 15 feet high, it could barbecue a 10-foot-long hotdog! In the last ten years, small portable gas grills have become popular for picnicking.

Over the years, there have been many changes to the way that people cook food, and specifically the way that people barbecue their meat. Grills have gone from being inefficient and messy to being a popular and relaxing methods of cooking used by Americans today.