Food For Thought The History of the Hot Dog

The History of the Hot Dog 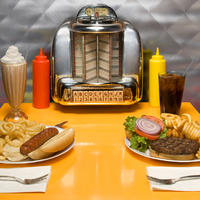 Have you ever wondered how hot dogs came to be an all-American classic? Where do hot dogs come from? What is a frankfurter exactly, and why are they called hot dogs? Hot dog history is full of colorful stories that contradict each other, so which ones are true?

A hot dog is a kind of sausage, and sausages have been around a long time. The first known reference to sausages is in Babylonian texts from 3,500 years ago. Sausages were popular with ancient Greeks, Romans and probably European tribes, so people have been enjoying hot dog-like snacks for most of recorded history. People know a good thing when they taste it!

Hot Dogs Made in Europe

The hot dog popular today was invented somewhere in Europe, but the exact time and place is still debated. The people of Frankfurt, Germany, claim it was invented there in 1487, which is where the name frankfurter comes from. Another story claims they were invented by a butcher who lived in Coburg, Germany. Then there are people in Vienna, Austria, who say the hot dog comes from their home town. Vienna is called Wien by locals, and that’s why they’re called wieners.

The exact birthplace of hot dogs may never be known for sure, but historians agree European immigrants who came to America in the 1800s were already eating “dachshund” sausages, or “little dog” sausages. They were called that because they were thin and slightly curved so that they looked like dachshunds, small German dogs that have long, skinny bodies. Hot dog historians say the Germans always ate dachshund sausages on split buns, but that hasn’t stopped people from claiming they invented the hot dog bun!

One story says a German immigrant to New York named Charles Feltmann started selling dachshund sausages from a wagon in 1867. He served them in rolls with sauerkraut, and that, some claim, is the first real American hot dog.

Another story says the hot dog bun was invented at the St. Louis Louisiana Purchase Exposition in 1904. A German immigrant named Anton Feuchtwanger let people borrow white gloves to eat the sausages he was selling, but no one was returning the gloves. Anton’s brother-in-law, who was a baker, created some long rolls for him to use instead. Hot dog historians say no way to this story, too.

There are a couple of famous stories about how frankfurters got the name hot dog, but historians say they just aren’t true either. One story claims the name hot dog came from a cartoon by the sports cartoonist Tad Dorgan in 1901. Another says a man shouted for a “hot dog” at a ball game in St. Louis and it caught on.

While these stories might be popular, the word hot dog started showing up in college newspapers in the 1890s, when franks were sold in wagons outside of school dorms. In 1895, the Yale Record was the first to call them “hot dogs” in print.

Hot dogs didn’t start to become the American classic they are today until 1893, when they were sold at the Columbian Exposition in Chicago. They were a huge hit with the crowds, who appreciated how delicious, affordable and easy to eat they were. It wasn’t long after that the hot dog became the snack of choice at ball parks around the country.

In 1916 the first Coney Island hot dog eating contest was held on the Fourth of July. They still hold the contest every year, and it’s why the hot dog is such a popular tradition on Independence Day. By then, the whole country had embraced hot dogs, but in 1939, President Franklin D. Roosevelt made it official when he served hot dogs to King George VI of England at a picnic in Hyde Park, New York. Some stuffy old-timers worried it wasn’t dignified, but the King liked his hot dog so much he asked for seconds.

The next time you bite into a juicy frank wrapped in a fluffy bun, take a moment to thank all the people throughout history who helped bring it to your grill. Even in ancient times, they understood that the hot dog is a sandwich fit for a king.