Food For Thought What is Cotto Salami

What is Cotto Salami 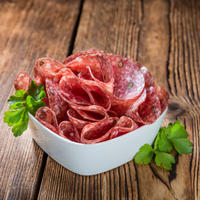 Cotto salami is a delicious lunchmeat that both kids and adults love. People know almost everything there is to know about the popular lunchmeat, from how it's cooked to where it's from. Read on, and you can be a salami sage as well.

A Tale of Two Sausages

Have you ever wondered why, in the case of cotto salami, two seemingly different products at the supermarket have the exact same name? It turns out that the small, dark option and the light, tender one have a lot in common. The ingredients are often the same, with the drastic difference due to a simple change in the preparation methods.

The plump and tender sandwich salami you might be familiar with from the cold cuts case at the supermarket is the product of a wet cooking method. After all the ingredients are put together and bound up in a casing, the sausage is usually smoked to achieve an attractive color. Then, it's cooked slowly in a water or brine bath until it reaches a safe temperature all the way through. When it's cool enough to safely package, it's wrapped up and sent out to hungry people on lunch breaks across America.

Aged dry salami looks completely different at first glance. It's hard and wrinkly, sometimes with a white exterior. It's also usually much smaller. As a matter of fact, it's the same ingredients treated in a different way. First, the raw sausages are smoked slowly until they reach a high enough temperature to make them safe to eat. Then they're doused in water so they cool off quickly. Finally, they're dried at room temperature, giving them the darker color and wrinkled appearance.

Take a trip in your imagination to the foot of the snow-capped Alps. Smoke rises from near an Italian farm cottage right outside a small village. You open the door to the smokehouse, and freshly made sausages hang from the rafters. That's where cotto salami got its start: among the hilly plains of Piedmont.

There's a reason that cotto salami has its peculiar name. Cotto is the Italian word for cooked, and cotto salami is distinguished from other types of salami because it is, in fact, brought up to a high temperature during the preparation process. Traditionally, many other types of salami were never heated. Instead, raw meat was fermented and cured with salt. That's a lot tastier and safer than it sounds, but you don't have to worry too much about contemporary sausages. Modern meat methods have advanced considerably since the old days in Italy.

But Why Is It So Delicious?

Quality ingredients are a big part of what makes good cotto salami. It all starts with some of the most flavorful cuts of meat from chicken, beef and pork. These meats are mixed with sugar and salt, then spices are added, such as paprika. This gives cotto salami its satisfying yet mild flavor that pleases everyone in the family. After that, quality cotto salamis are checked rigorously and packaged conscientiously to ensure a reliable level of quality and nutritional value.

That's the story of cotto salami. From the Italian Alps to lunchboxes around the globe this lunchmeat has made an epic journey. What's even more impressive is that it has remained so tasty over all these years.